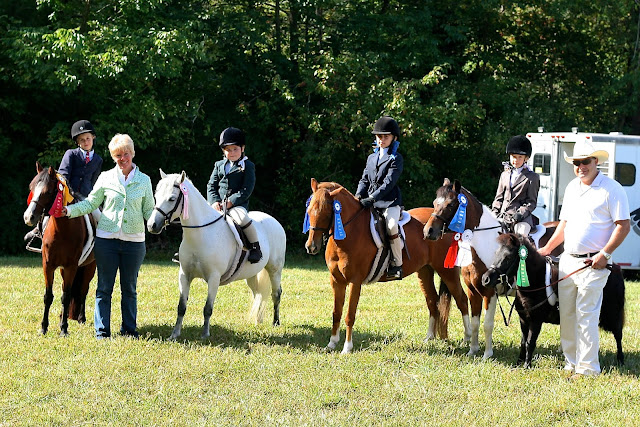 Can I get a Hallelujah for a HaPpY horseshow?!

My 4 yo little buddy John even got a ribbon at his first show.
(Too bad he's generally UNhappy about having his picture taken so we didn't get any great ones of him and his adorable Betty Boop together.) 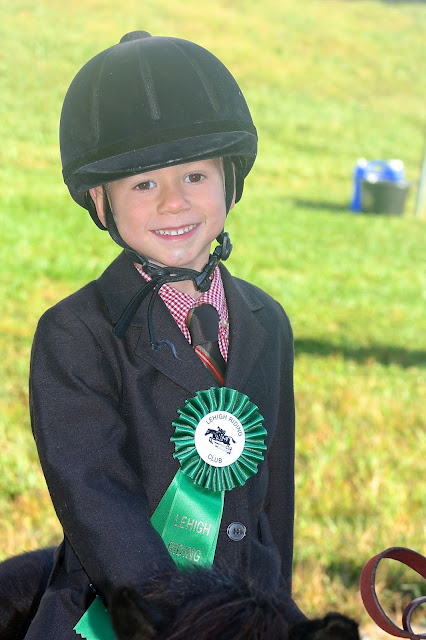 His big sister Bella also started with me when she was four.
She had so much fun here on her new pony Mystery and got several great ribbons.
The awesome judge Robin Townsend made her smile even bigger by giving her a blue ribbon! 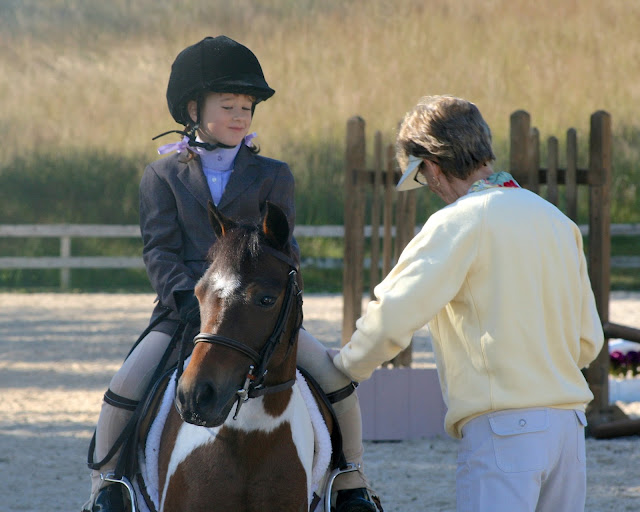 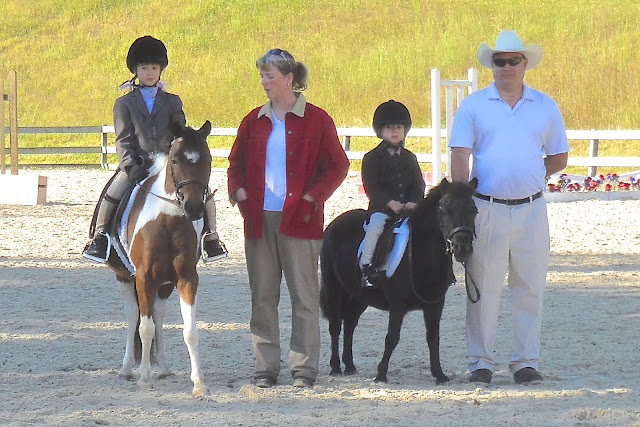 They even repainted their horse trailer (DIY!) and Elizabeth got her craft on using her cricut to make a snazzy farm name across their trailer! Wow! I feel lazy next to Elizabeth!

A big congratulations also to my newest student Riley ~
She'd just bought her pretty pony three days before the show!
They made a beautiful pair and got a pink ribbon (Riley's favorite color). YaY! 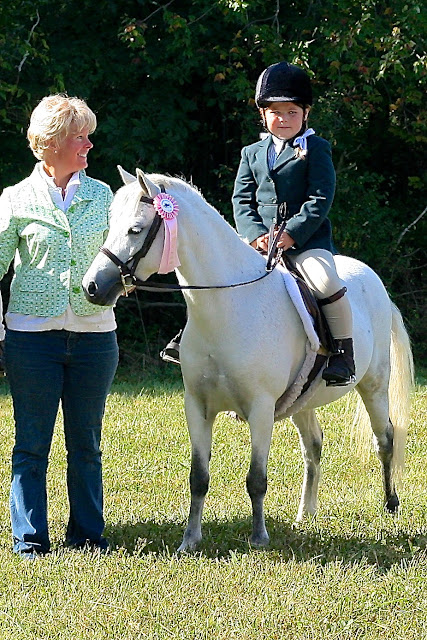 Jack and Merit had another great show!
I'm so proud of my sweet boy. He's brave and loves his pony.
They were a whirling dervish in the warm-up ring tho as Jack practiced cantering and begged to jump!
Jack's only complaint was that he was beaten by his sister. It was her turn though. She'd really earned it. 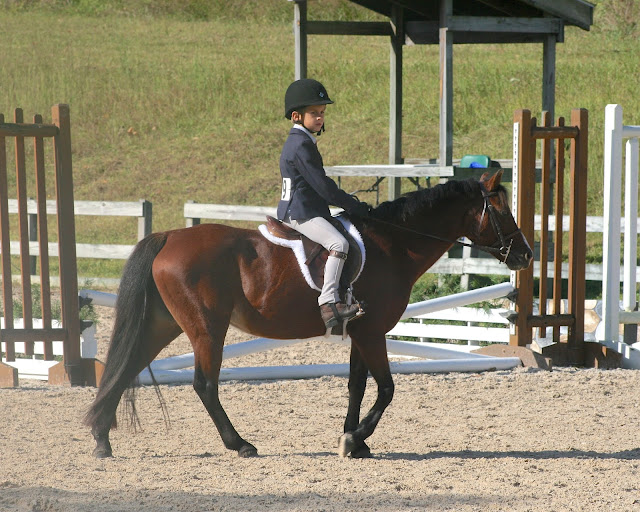 Of course, I was thrilled for my dear daughter to finally feel like a success on her pony.
Sarah got so many compliments on her riding and attitude... Yes, Piggy still dumped her twice, but immediately after the first time in the warm-up, she went right into the ring and got a blue ribbon!
Later, after schooling our new student Riley's cute pony over jumps, Sarah decided to jump Piggy.
He dumped her again. AGAIN she got right back on with nary a whimper.
xoxo My girl is tough and talented. xoxo
Congratulations Bear!!! 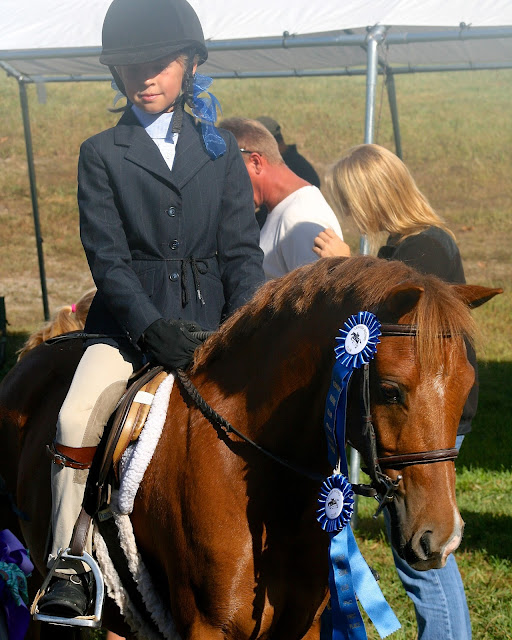 Throughout all our horsey activities The Farmer/Daddy works hard behind the scenes.
Not only does he have big muscles (brain and biceps!) and a soft touch with kids n horses, but equally priceless during these events... he has the best sense of humor n always keeps me sane!
Thank you honey for always coming and lending support!!! 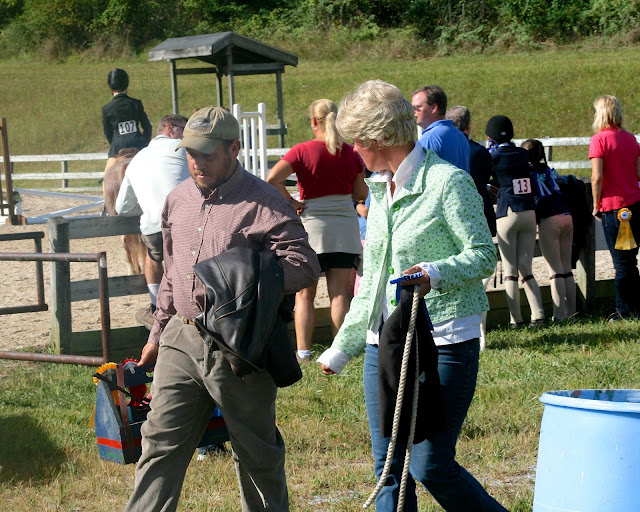 Thanks to all my friends who said a prayer for a peaceful day!
Hope you're all happy as a bird with a french fry! Has it really been a year?
Once again we went to the Howard County Fair horse show in August.
It's our favorite due to the shade and rides and nice people who work the show.
Plus, they award money with their ribbons!
Jack LOVES that part.
In fact, the sweet announcer began saying that every time he got a ribbon to make him feel better!
"In third place, with more money, It's Jack and his pony Brookside Merit."
So Jack's 1/2 of the show was very happy! 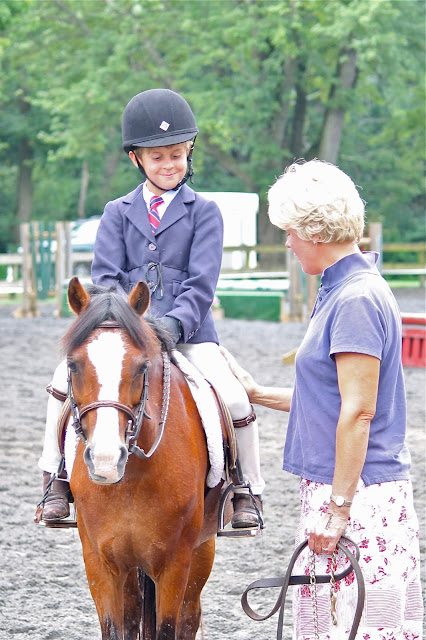 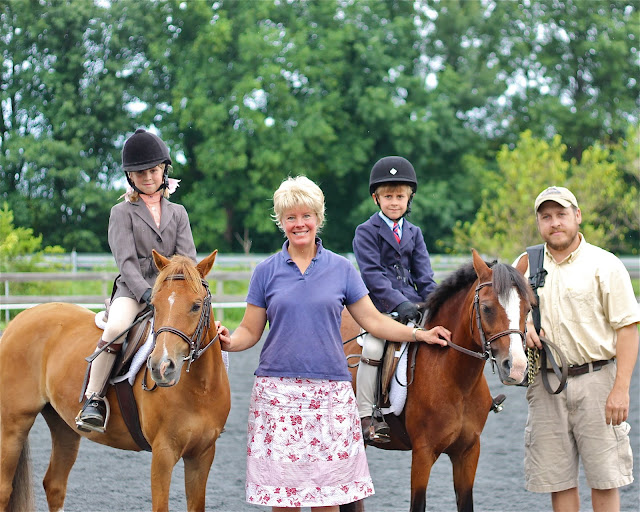 These pics were taken by our #1 horse show mom "Miss Diane."
She's all heart and takes better care of my family than I do!
At one point she noticed that Sarah had lost a pigtail holder.
She quickly yanked out her own and put Sarah back together.
All day she shared her own water bottle and hugs.
She made it a very happy day for us all.
One day soon I hope she gets to help her own daughter at a show or even show herself! 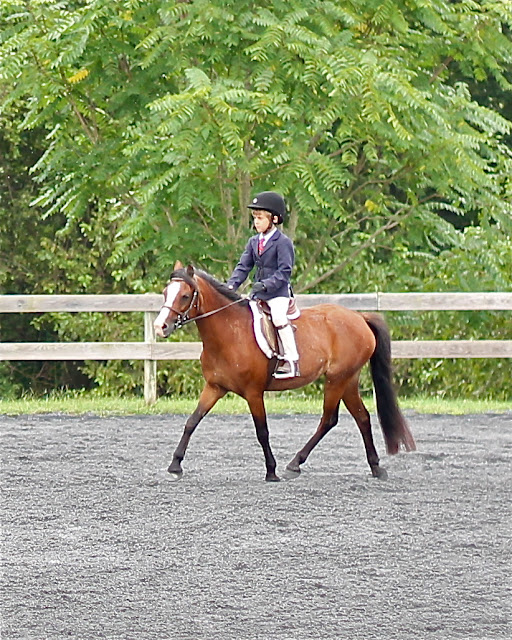 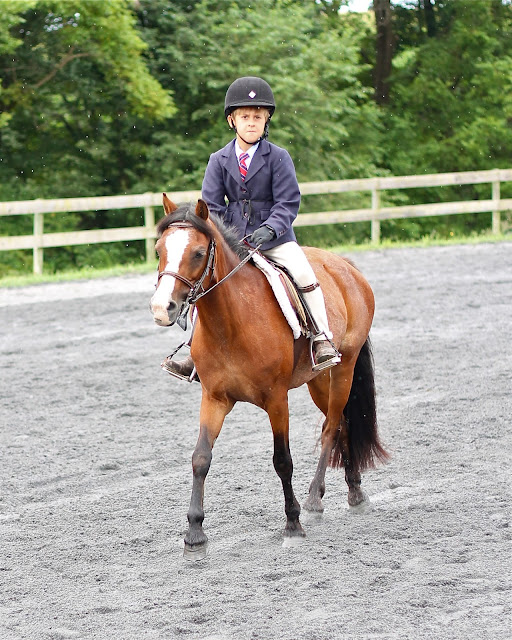 I must stop and tell tales on Jack now.
After all, that's why I keep this blog, to remember these blessings!
Jack practiced his best equitation in the warm up ring.
I was so proud to see him concentrating on so many things at once.
He even cantered!
Once in the actual show ring, Jack lost his focus as he navigated 'round the jumps and other ponies.
We haven't had much practice with all this.
Soooo, at one point he was going in the opposite direction of the other riders. 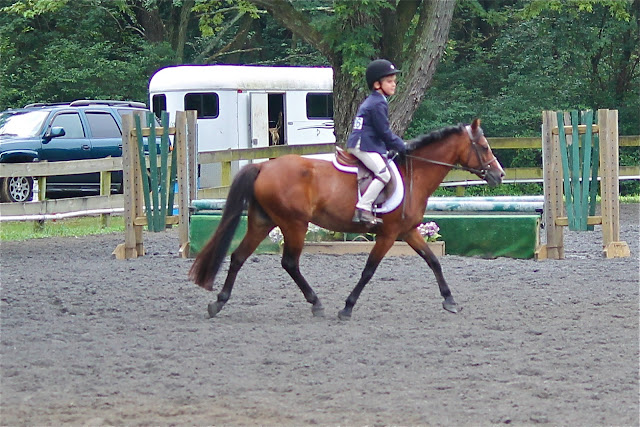 And when they were asked to line-up (shoulder to shoulder), he put Merit head to tail behind the pony beside him (a big no-no due to biting or kicking).
When I asked, he said he lined up "like in Kindergarten."

Once, the judge asked each of the kids about pony care.
I was a bit too smug.
I'm an ex Pony Club instructor and am big on teaching my kids horse management.
They both work hard caring for their ponies.
So I was unprepared for this:
When asked to name one thing that a pony must get every day (hay, water, maybe grooming)
My son answered loud n proud "medicine." 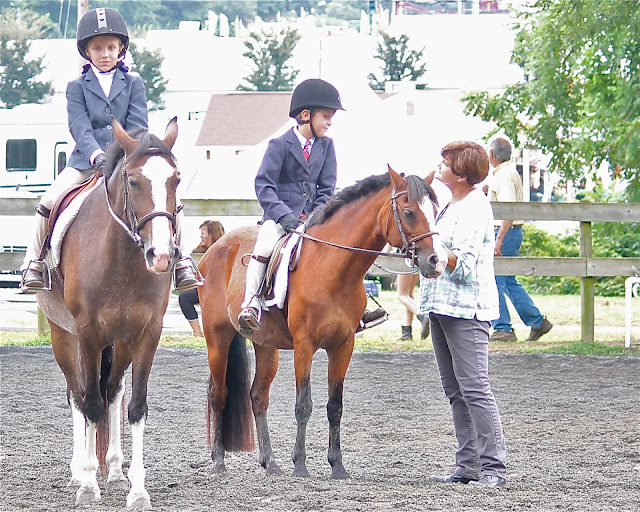 I cringed imagining the judge thinking we drug our show ponies!
But it was my fault.
Jack was just repeating what I said every day.
Merit's had Lyme disease, and I'd remind him when it was time to deliver her feed w/doxcy that it was very important that he not get distracted and forget to give it to her. 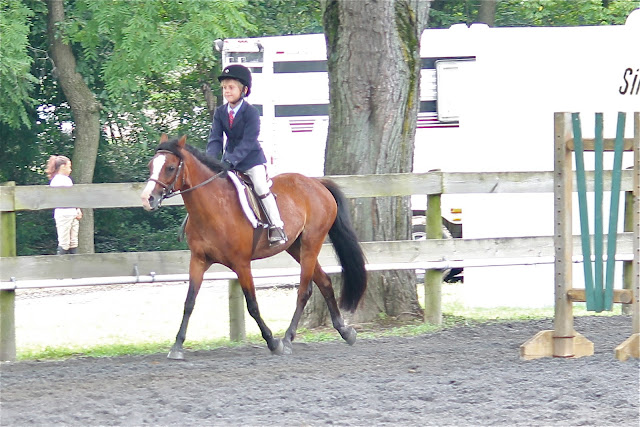 Then it was Sarah's turn and she was not quite as happy.
I'm a glass half full kinda girl (well, most days of the month anyway)...
So, despite the fact that Sarah's pony dumped her again, I thought it was a great day.
You see, Piglet cantered in the warm up ring like a pro, and dumped her less than years past! 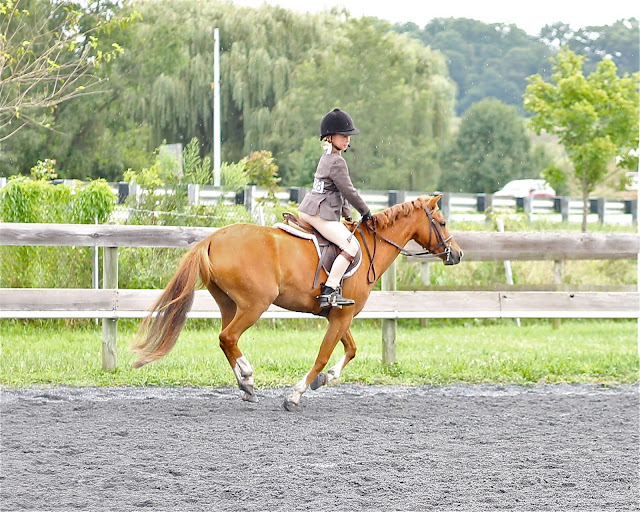 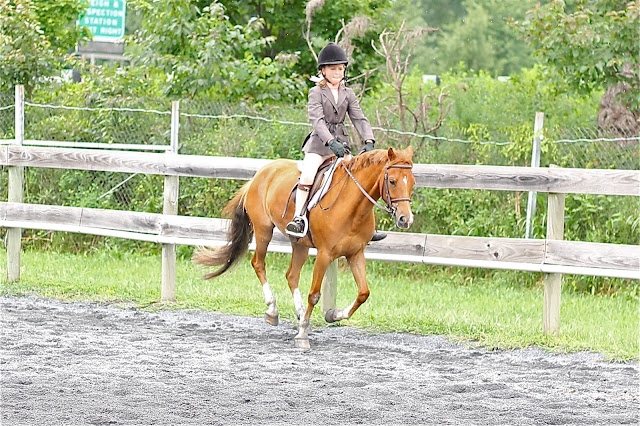 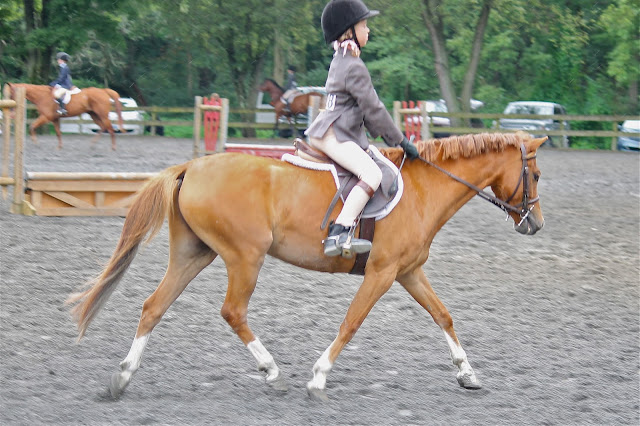 Truly, to be fair, Piglet's had virtually no show experience and all the other horses, fancy jumps and squawking speakers are a lot for him to handle.
Another trainer at the show was extra kind to Sarah and went out of her way to compliment Sarah many times for being such a strong and determined rider.
In fact, several people said similar things to her.
Most pros have stories of the naughty ponies that made them better riders!
Remember wee  "Naughty Ed?" 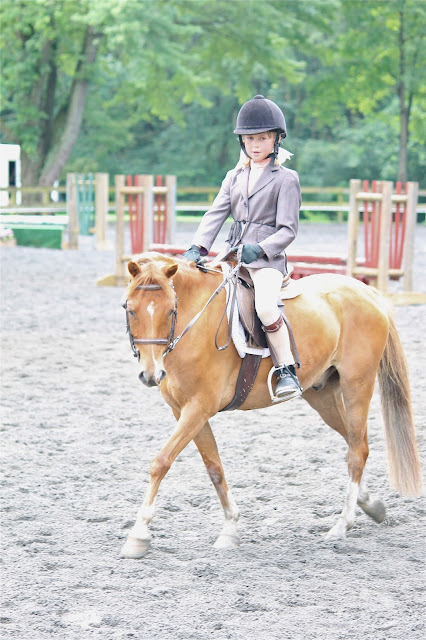 Piglet really is getting better though.
And I am so proud of Sarah's riding and her attitude!
She always gets back on and (eventually) forgives Piggy.
Piglet hadn't turned 5 yrs yet, and Sarah'd just turned 7 yrs when we bought him as a green pony.
Since then they've shown, schooled X-country, done hunter paces and group trail rides, ridden in a parade and foxhunted.

Each year I say I'll get them to more shows. This year I mean it.
Maybe they'll even try a starter horse trial.
In fact we'll be going out again very soon.
Say a prayer friends that he doesn't dump her!!!

Okay, now I get to tell you the very best part of the show!
A stranger walked up to me at the ingate and asked if Jack was my son.
She wanted to tell me that he'd made her day!
She said he was the happiest (& youngest) kid at the show.
She'd stopped to talk with him earlier and told him he looked very happy.
He said of course he was happy.
His pony was happy, so he was happy! 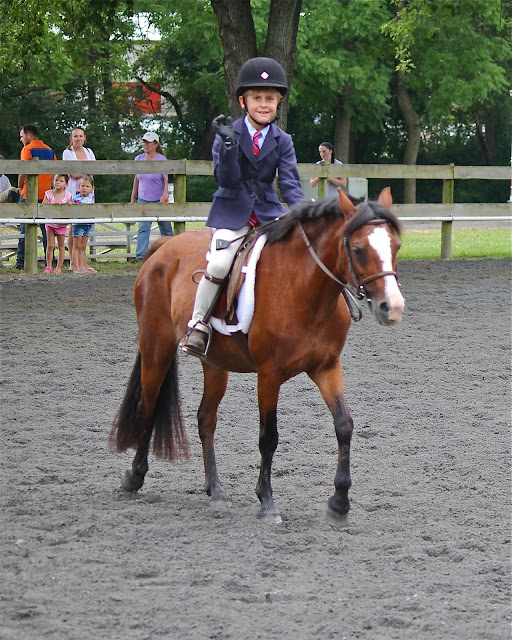 That made all of us happy! 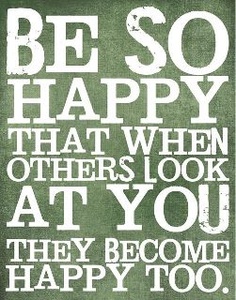 Hope you have a happy day friends! 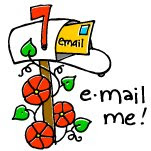 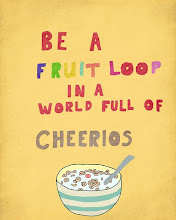 Please Visit PetFinder.com. That's how we found our Olivia! 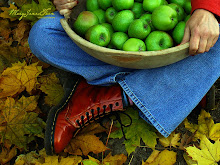 "Do what you can, where you are, with what you have." Theodore Roosevelt

Trust in the Lord with all your heart; do not depend on your own understanding. Seek his will in all you do, and he will show you which path to take. Proverbs 3:5-6